(Or, This Festive Season, Teach Your Children to Believe Responsibly)

Currently circulating on social media is this letter from a couple of well-intentioned parents to their questioning son, who is looking for the truth about Santa Claus. Not wanting to deprive their boy of his innocent credulity, nor wishing to tell him outright lies, the parents take the circuitous route of explaining Santa as a metaphor for a bunch of desirable qualities like love, hope and happiness.

I can understand why many parents choose not to disenchant kids at an early age. It’s endearing to see children take delight in their fantasy worlds. It’s lovely to watch them immerse themselves in works of fiction and let their imaginations run wild in creative play. What’s more, fictional characters like Harry Potter, Santa Claus and the tooth fairy are common reference points for the majority of children in our society, and their stories are powerful symbols of a shared popular culture.

Just as I can see the pleasures of letting kids revel in their fantasies, I can understand why parents are keen to ensure that their kids develop a steady grip on reality. As children mature, it’s increasingly important for them to be able to distinguish real-life characters and events from fictional ones, to understand real relationships of cause and effect, and generally to know how to get by in the real world. After all, we don’t want to cultivate a generation of hapless, ineffectual dreamers like Walter Mittey, to take a fictional example.

So, fantasy and reality are both important for kids. But how do we decide when to allow kids to believe, when to encourage them to disbelieve – and for that matter, when to help them suspend their disbelief?

The parents who wrote the letter above would like to have it both ways. They’re reluctant to dump Santa Claus altogether, as he’s sentimentally tied to ‘the spirit of Christmas’. On the other hand, they’ve realised that as their son grows older, the traditional Santa myth is becoming untenable. Too much of it doesn’t make sense: Santa can’t get around to all the kids in the world within 24 hours; his girth couldn’t possibly fit in a chimney; the present-making elves have surely been superseded by department stores by now; and there are no flying reindeer in the zoo.

So, the parents have hit on a compromise: It’s Santa, Jim, but not as we know him. 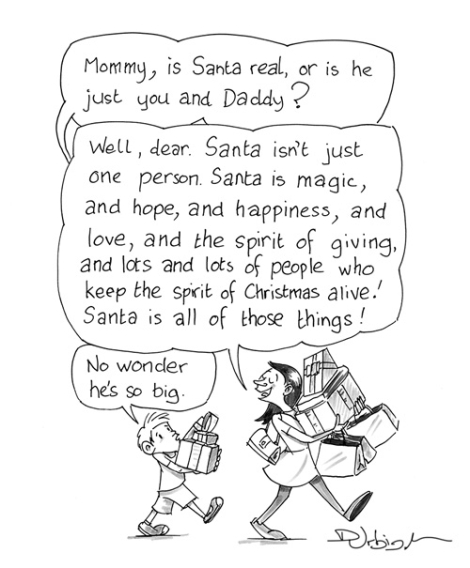 Unfortunately this compromise is unsatisfying. Aside from its complete neglect of the historical figure of St Nicholas, the notion that Santa “is the magic and love and spirit of giving to others” seems odd, because if the Santa story teaches children anything about the gift economy, surely it teaches them to receive, not to give.

In the letter, things take a turn for the irrational when the parents build on the metaphor of Santa-as-magic. They start by saying that Santa teaches children to learn how “to believe in something they can’t see or touch.” They go on to say that children, throughout their lives, “will need this capacity to believe in…things you can’t measure or hold in your hands.”

When you’re trying to decide whether it makes sense to believe in something, the question of whether you can see or touch it is a bit of a red herring.

Illustration by Jay Cover via booooooom

The wording of the letter hints that children should be taught to believe, more generally, in anything invisible and intangible, by virtue of the fact that certain things worth believing in are invisible and intangible.1 A far better use of parental authority, it seems to me, is to encourage kids to apply critical thinking to all the stories they encounter.

Parents can be powerful advocates for their children’s intellectual autonomy. They can help their kids to draw their own well-reasoned conclusions; to value coherence and logical consistency (among other things) in the construction of their worldviews; and to cleave to their beliefs with a level of confidence proportional to the amount and quality of evidence available.

The ‘Santa lie’ raises a number of other ethical questions which David Kyle Johnson tackles in his post Do parents who tell their kids about Santa end up on the Naughty list? on The Ethics Centre blog.

Zoe Krupka and Matt Beard take up some of these issues in their Sydney Morning Herald article Should you lie to your kids about Santa?, pointing out that “lying, particularly telling lies that need ongoing embellishment, erodes trust and can diminish a child’s sense of safety in the world.”

1 This kind of mistaken belief is potentially harmful, as Massimo Pigluicci and Maarten Bourdry explain in their New York Times article The Dangers of Pseudoscience.