The Socratic method, when used correctly, is an ingenious and dependable way of fostering collaborative dialogic argument in the classroom. Yet the Victorian Department of Education and Training (DET) presents Socratic discussions as something more like a chinwag, with stock sentence-starters awkwardly jammed in. It’s not only a travesty of the spirit of Socratic dialogue, but a missed opportunity for supporting the development of genuine critical thinking in schools.

The trouble with the DET framing of Socratic discussion begins where it opens with two reassuring falsehoods: that “there is no set way of conducting a Socratic discussion, other than to include open-ended questions to inspire thinking” and that the teacher should “resist intervening. Their role is that of an observer.”

Better counsel comes from any number of more orthodox primers on conducting Socratic enquiry. Stanford University’s ‘The Socratic Method: What it is and how to use it in the classroom’ (reprinted here), for example, demands that “participants account for themselves, their thoughts, actions and beliefs”, emphasises the vital and active role of the teacher as dialogue facilitator, and urges: “Above all else, use follow-up questions! Get students to account for themselves.” Contrary to the impression given by the DET, there is indeed a particular way of conducting a Socratic discussion: it is by probing each participant’s beliefs and values, drawing out and interrogating arguments, identifying assumptions, scrutinising beliefs for their consistency, and correcting misconceptions.

It’s an intensely rigorous process, but none of this comes across in the DET’s introduction, nor in the example script that follows. The script reflects a discussion that Years 5/6 students ‘might have’ towards the end of a unit on civics and citizenship (and the ‘might’ suggests that this is a fictitious model, rather than the transcript of an actual discussion). 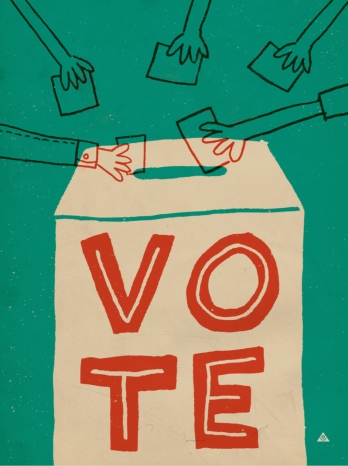 The teacher’s opening question is this:

In many countries, voters choose whether to vote or not. What do you think about compulsory voting in Australia?

This example script is preceded by a description of Socratic discussion as “a pedagogy which exploits the power of talk to shape children’s thinking and to secure their engagement, learning and understanding”. I suggest that teachers concerned with these goals turn their attention to the published research indicating that children may lack the cognitive skills needed to make unaided peer-supported enquiry productive. As I’ve argued elsewhere:

it’s not plausible to suppose that children in unguided Socratic discussions can self-organise their way to an expanded repertoire of thinking skills… Good thinking doesn’t usually occur spontaneously, in schools or elsewhere. It has to be cultivated with the help of (sometimes counterintuitive) strategies like being actively open-minded, questioning assumptions, making sound inferences and entertaining counter-opinions. Facilitating collaborative dialogues is an obvious way to help children practise these strategies. The facilitator provides scaffolding while the children do the intellectual heavy lifting: examining conflicting opinions, evaluating arguments, generating alternatives, drawing logical connections and making reasoned judgements.

It’s only after extensive dialogic practice – during which the facilitator systematically models, elicits and highlights instances of effective thinking – that a group will be able to conduct Socratic dialogues more or less autonomously. Until that time, participants need the active and judicious support of a trained facilitator, much as a junior sports team needs substantial help from a qualified coach.

With this in mind, I’ve prepared a response document indicating in detail what I would think, say and do if I were charged with facilitating the Year 5/6 Socratic discussion shown in the script above. I hope this document will offer novice facilitators and interested onlookers a useful insight into the sorts of strategies I routinely employ in my own classrooms. 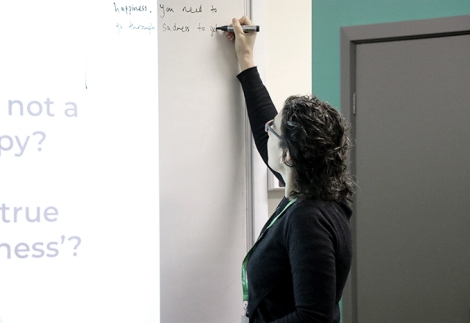 Scribing students’ arguments is also an important part of my facilitation practice.

As I’ve argued previously, the Socratic method is an exquisite way of developing reasoning:

In the give-and-take of dialogue, the [participants] are responsible for evaluating whatever arguments are on the table, thinking up alternatives, and making up their own minds. Collaboration is vital to the intellectual process of enquiry, because the [participants] build on each other’s ideas and they’re provoked to reflect very critically when they encounter divergent opinions. They become constructively sceptical, recognising that no claim – not even their own – deserves to be unquestioningly accepted.

To quote again from the Stanford University piece:

The Socratic method demands a classroom environment characterized by “productive discomfort.” In the best of Socratic dialogues, there is real tension among the interlocutors. The stakes are high. Will one be called on, be called to account? …

Bertrand Russell once wrote, “…when our inquiry is finished… we shall have come to see a complicated structure where we thought everything was simple, that we shall have become aware of the penumbra of uncertainty surrounding the situations which inspire no doubt, that we shall find doubt more frequently justified than we supposed… The net result is to substitute articulate hesitation for inarticulate certainty.”

To achieve these outcomes, the involvement of the facilitator had better not be haphazard, much less absent. To advocate Socratic discussions without some kind of Socrates is as foolish as imagining that students will stumble on critical thinking mastery by accident.

One response to “Doing without Socrates” 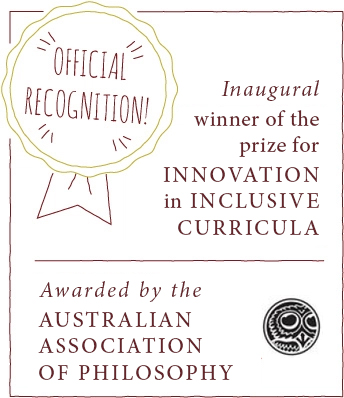