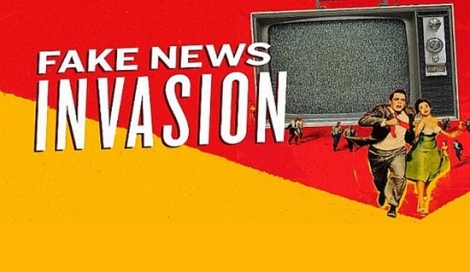 “At a time when political rhetoric is riven with irrationality, when knowledge is…seen…as an encumbrance that can be pushed aside if it stands in the way of wishful thinking, and when authoritarian leaders are drawing ever-larger crowds, epistemology needs to matter.” So says Peter Ellerton, a leading Australian educator in critical thinking. Teachers, this is a call to arms! Each one of us can and should play a crucial role in supporting students’ epistemological development.

In recent years, developmental psychologist Deanna Kuhn and her fellow researchers have uncovered a series of steps that children take as they mature in their epistemological understanding.

Babies and young toddlers are Realists: they simply accept the world at face value. They don’t distinguish between what goes on in their minds and what goes on in the world. It must seem to them as though their beliefs are a faithful reflection of an external reality. As far as they know, we all experience the same reality, and so –– they conclude, probably unwittingly –– we must all end up with the same beliefs. Indeed, for the Realist, there’s no possibility of false or conflicting beliefs.

By the time children start primary school, they’ve reached the Absolutist level. They’ve come to understand that knowledge is constructed by human minds, and that you might indeed have some false beliefs, especially if you’re relying on incomplete or misleading information. Children at the Absolutist level perceive truth and falsehood in very black-and-white terms. They think, as Kuhn puts it, “If you and I disagree, then one of us is right and one of us is wrong, and resolving the question is just a matter of finding out which is which.” To settle any question, then, children at the Absolutist stage will turn to whatever authority they take to command the relevant facts. It might be an authoritative person (like a teacher or parent), or it might be an authoritative ideology, or a collection of social mores, or even the child’s own seemingly incontrovertible personal experience.

Children typically reach the Relativist level by upper primary school, and usually remain at this level throughout their teenage years. They will have noticed that reasonable people, and even experts, disagree with each other on a regular basis. And they’ll have seen that over time, any given expert might change their position on any given issue. It’s clear to Relativists, then, that knowledge is both contestable and changeable. There are no longer any absolute certainties or stable facts. From here, the Relativist concludes that everything is a matter of opinion. And anyone is free to formulate their own opinions, with the reassuring sense that their views are just as legitimate as anyone else’s. They don’t even need to justify their opinions, because Relativists consider the very act of holding a belief to be its own justification. According to Kuhn’s characterisation, the Relativist thinks: “Let’s just let everyone believe whatever they want. It’s their choice. It’s not our right to question what they want to believe.” It’s a Relativist misconception that just because everyone has a right to his or her opinion, all opinions must be equally right.

The last step along this path of epistemological development is the Evaluativist level, which people might reach in early adulthood. People who attain this level recognise that while everyone is entitled to their beliefs, this doesn’t render all beliefs equally true. As Kuhn points out, “some opinions are in fact better than others, to the extent that they are better supported by argument and evidence.” Evaluativists see knowledge as consisting of judgements that can be evaluated according to criteria –– criteria that are themselves open to evaluation. Justification now becomes more than mere personal preference. Conflicting viewpoints can be compared, and alternatives can be weighed up. Evaluativists recognise that engaging in reasoned debate between competing ideas can actually help us to develop a more informed opinion.

The problem is that many people –- perhaps most people -– never reach the Evaluativist level. And this is no mere academic issue: it has vast social and political implications. Relativism is not just misguided, it’s dangerous: both in science, for instance, on the issue of climate change; and in ethics, for instance, in relation to child slavery or female genital mutilation — to call on examples offered [subscription required] by Sue Knight and Carol Collins. 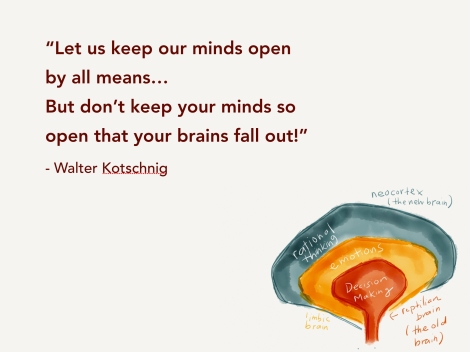 Clearly, we need to balance open-mindedness with scepticism: that “scalpel of doubt” (to borrow Frank Breslin’s phrase) that helps us to separate sense from nonsense, truth from falsehood and right from wrong. John Dewey made the same point over a century ago when he wrote that we want our minds to be open, to be hospitable to new or unfamiliar ideas, yet we don’t want our minds hanging out a shingle that tells those ideas: “come right in, there’s nobody at home.”

The notion that we need to think critically and deliberatively is a common theme in the writings of philosophers who care deeply about education and social progress. “The essence of the liberal outlook lies not in what opinions are held but in how they are held: instead of being held dogmatically, they are held tentatively, and with a consciousness that new evidence may at any moment lead to their abandonment,” wrote Bertrand Russell in a 1950 essay. Four years later he took up the theme again: “I mean by intellectual integrity the habit of deciding vexed questions in accordance with the evidence, or of leaving them undecided where the evidence is inconclusive. This virtue…is to my mind of the very greatest social importance”.

The evidence here is conclusive: epistemology has been mattering for ages. Fellow teachers, let’s heed the call. Time’s a-wasting.

This is the first in a series of posts about epistemological understanding, published in the lead-up to World Philosophy Day 2018. Read on with Dying Goats and Flying Dogs: Troubles with Relativism.